Not seeing a property type option? Try our advanced search 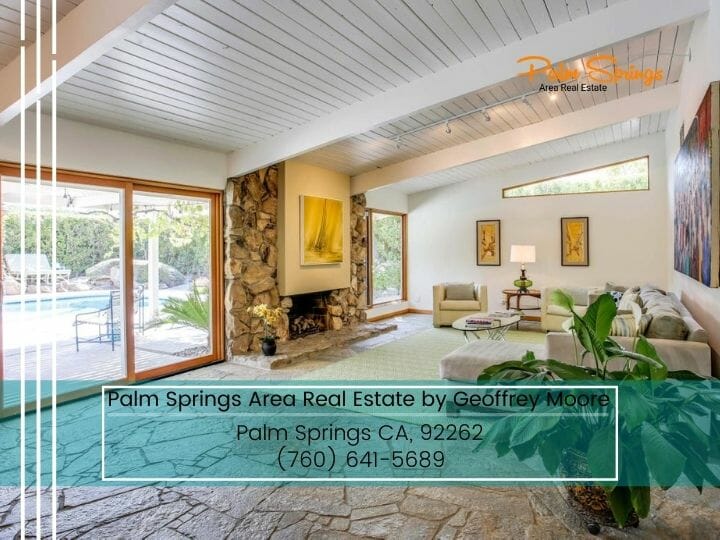 Palm Springs has more than its fair share of beautiful neighborhoods. Each neighborhood in this desert resort city has a unique look and style to offer. From the gated community mansions of Thunderbird Heights to the artsy adobe abodes of downtown, each neighborhood offers something special for those looking for a new place to call home.

The original architectural designations were created by Marjorie Sorensen as part of her historical research on the architecture in Palm Springs.

Upscale homes built in the 1950s and 1960s tend to be Modernist or Contemporary designs. Over the past few decades, developers have brought additional style elements into play as they have redeveloped aging neighborhoods such as Old Las Palmas and downtown.

History lovers will find many neighborhoods that preserve the area's rich history. Many of these areas offer small bungalows or Cape Cod–style houses from the early 20th century, along with modest Mid-Century modern houses that are reminiscent of a bygone era.

Some communities such as Tahquitz Canyon or Cathedral City consist entirely of homes constructed during specific periods, so you can tour multiple eras at once. 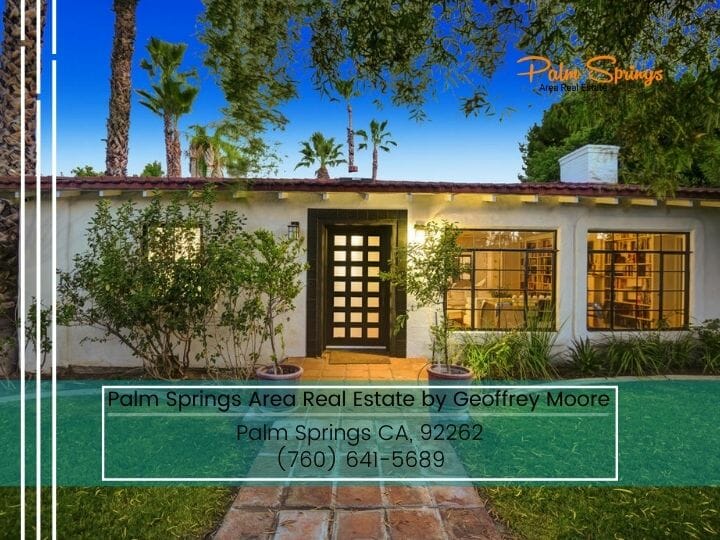 Palm Springs' predominant house style is mid-century modern. However, even among this style, houses have vastly different looks with sloped roofs, flat roofs, angular or minimalistic construction, and, of course, the massive variety of colors for which many California communities are known.

Many other styles exist in Palm Springs as well. However, every one of these home styles shares characteristics with others in ways that may surprise you. Below are some of the most common house styles you'll find in Palm Springs and its surrounding cities.

Mid-Century Modern was the dominant architectural style in the Palm Springs area from World War II until roughly 1969. With their open floor plans, large glass windows and massive support beams for roofing or carports, these homes reflect the simple living of that time period.

Nearly every affluent neighborhood developed before 1960 contains its share of Mid-Century modern homes.

Mid-century homes dot the Palm Springs landscape. Many of these homes' angular roofs have a single slope instead of the sloped roofs you'll find farther north in snow country. Others have flat roofs, giving the houses their sleek, simple style. 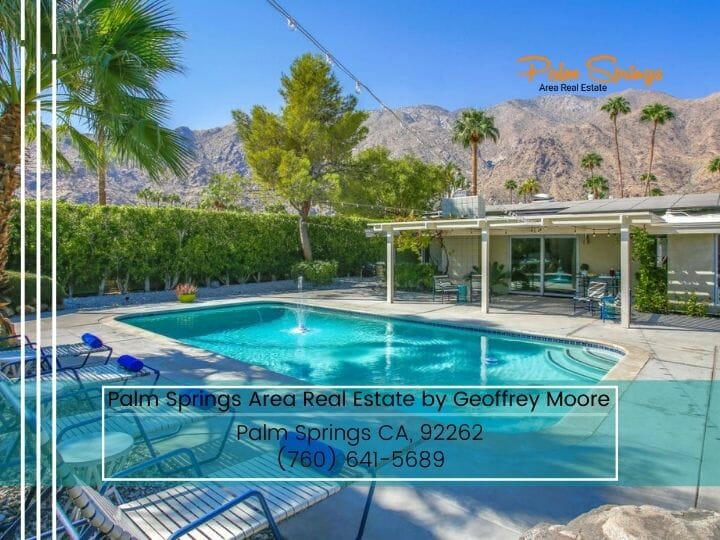 Add splashes of bright colors and open garages, and you have the home styles that give Palm Springs much of its character.

Since the Spanish settled California , Spanish home styles are and remain popular there. These houses feature asymmetric front facades, gabled or flat roofs with Spanish tile, and irregular plans. 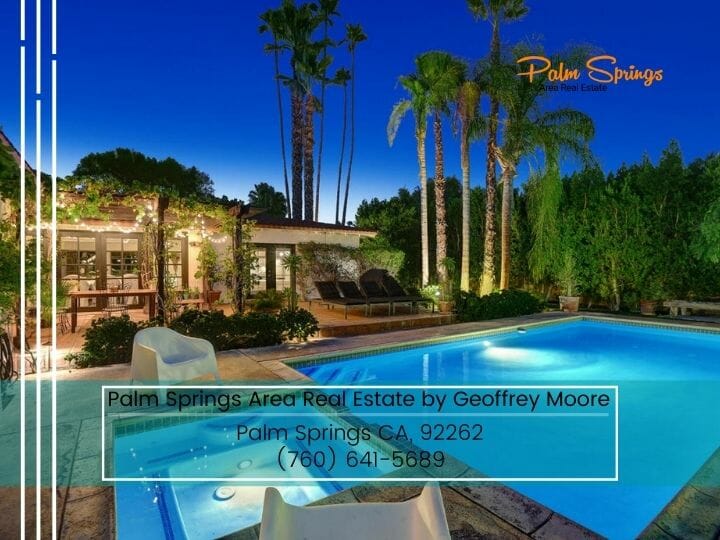 Also, many of these homes have arches that are round, pointed, or parabolic, along with balconies or towers, or both. You can easily tell the difference between these homes and the Tudor and Victorian homes of the northern U.S., which have many similarities, because of their other features.

You'll find stucco or plaster exteriors instead of brick or some type of clapboard siding, which completes the Spanish look of these homes. Some of them look like they're straight out of the Southwestern U.S. and Latin America, which the Spanish also settled.

Ranch home styles have a single floor and tend to be long with a narrow appearance. They're also low and have a rectangular or L-shaped plan. This is the home-style that dominated mid-century home building around the country, not just in Palm Springs. The whole idea is informality with grace, outdoor living, and having groups of people over. 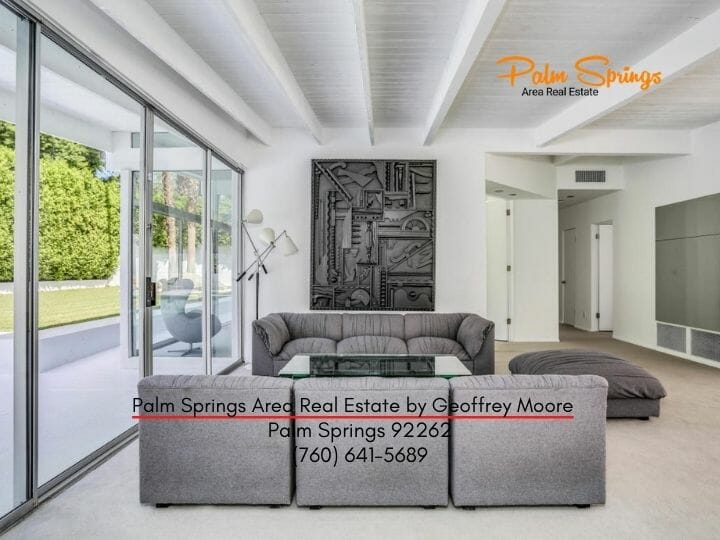 These houses have long covered porches with wooden batting, clapboard or plaster exteriors, and low-pitched roofs with eaves that overhang the house. They also sometimes have prominent chimneys. 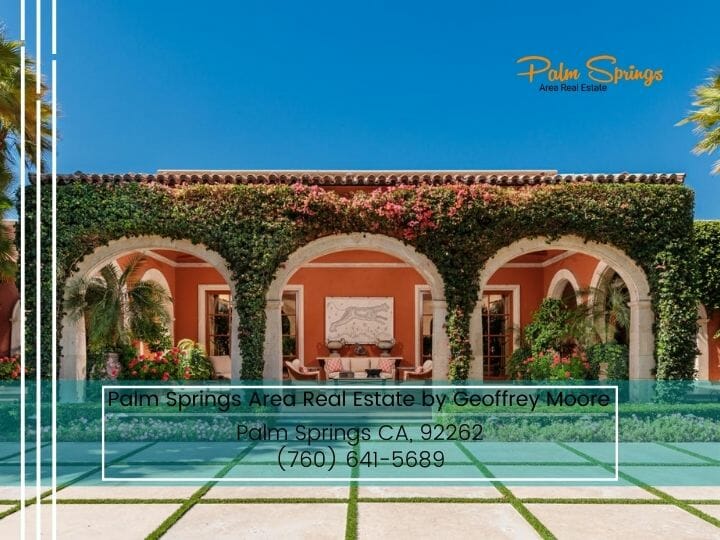 Mediterranean revival home styles take their elements from Spain, southern France, Italy, and elsewhere across the Mediterranean. They have Palladian windows, Spanish tiles, and other unique accents that differentiate this home-style from others.

The most popular architectural styles in Palm Springs today are Mediterranean Revival (including Spanish Colonial), Tuscan/Tahitian and Southwestern.

One distinct advantage offered by Mediterranean Revival homes is the privacy offered by large walls and windows that allow views into the center of the house while keeping prying eyes outside at a safe distance.

Spanish colonial revival architecture was popular with area developers because it allowed them to introduce designs from vernacular California towns without having to adhere to any particular historic requirements. The style was widely used between 1910 and 1940.

Some areas have more Spanish Colonial homes than others, such as downtown Palm Springs, La Quinta and Rancho Mirage. Nearly every older neighborhood has its share of these structures as well as many new subdivisions east of the I-10 freeway.

These houses take their cues from California during the 1830s and 1840s. The name gives away where this style originated: Monterey, California. Settlers in California in the 1920s wanted to hold onto this style as a way to honor Spanish heritage. 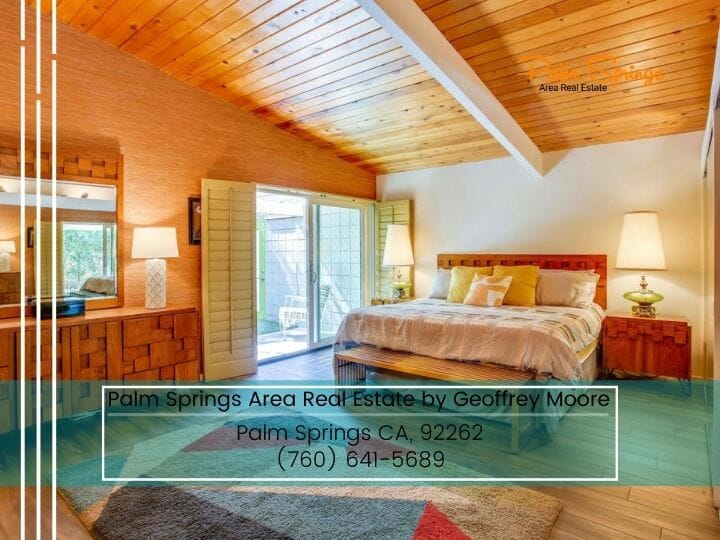 These have wood-paneled doors, gabled or hipped roofs, and second-story balconies in many cases. You might feel like you're in the desert southwest when you see these houses.

The Pueblo Revival style takes its name from the pueblos of California and southern Arizona. 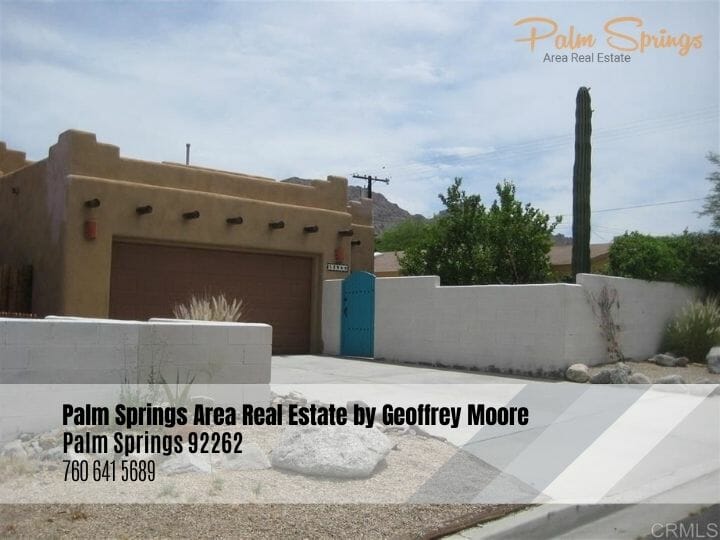 They're built in such a way that they look like the old adobe houses of early Spanish settlements in those parts of the country, and they closely mimic Mission Revival houses. Both draw on indigenous and Spanish designs to create their look.

If you like minimalism, you might enjoy Palm Springs' minimal traditional houses. Like ranch houses, they have a low, rectangular shape, but they're smaller and more likely to have stucco exteriors. 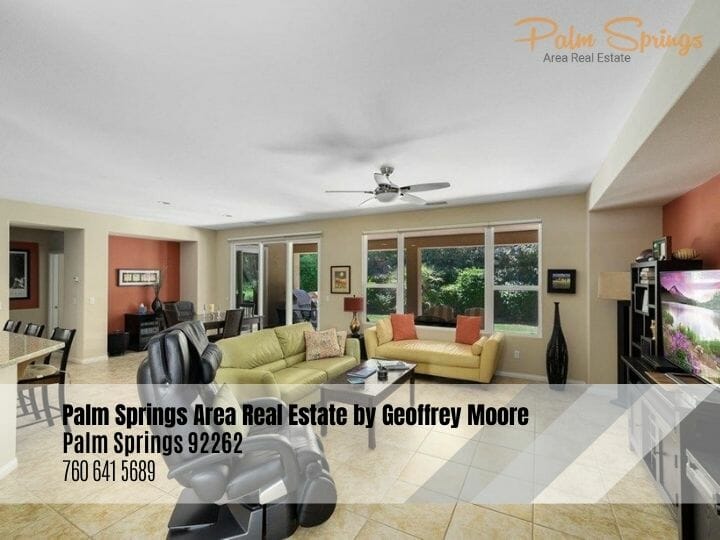 They also have multi-light windows, wood shutters, and simple, shallow entry porches.
These house styles don't have much in the way of exterior bells and whistles. They keep things nice and neat with as few extraneous design features as possible in true minimalist style. 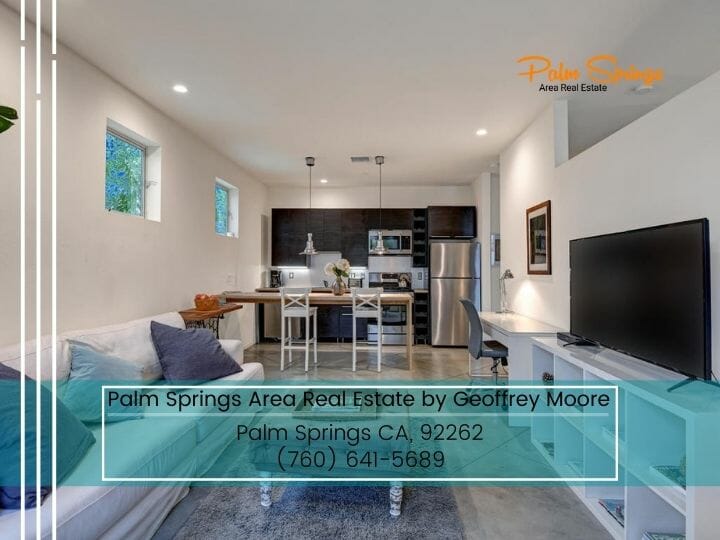 Many of the first buildings erected in Palm Springs used locally-sourced materials, and some even used recycled materials from previous buildings. However, those buildings are rare and difficult to find.

These homes tend to have gabled roofs and a simple square or rectangular shape with a wooden exterior and simple trim around doors and windows. Attractive in their own way, these houses make great homes for those who don't want a lot of extras.

Bungalows are another common sight in newer neighborhoods throughout Palm Springs. Palm Springs' most desirable bungalow neighborhood is downtown, where they're mixed with Mid-Century modern houses.

These one or two story homes were heavily favored by Hollywood celebrities who sought to escape southern California's intense heat and light during filming sessions. Other areas with large concentrations of bungalows include the neighborhoods of Bermuda Dunes, La Quinta and Rancho Mirage.

Modern ranch houses are another common sight throughout Palm Springs and surrounding areas. They're familiar to many people because their design is similar to that of suburban homes found across America.

Many have been custom-built with multilevel features that offer marvelous desert views or tucked away in secluded settings for privacy. Other popular features include indoor/outdoor living spaces, large patios surrounded by walls, stucco exteriors and peaked roofs with beams crossing them at various angles.

Modern ranches were constructed mainly between 1960 and 1969 but can be found in almost any residential area for sale today.

Frank Lloyd Wright, the architect famous for impossibly unique buildings, called his work organic, which means he designed houses to work with the environment rather than remake it in the houses' images.

There are some house styles in Palm Springs that fit that description because they do the same thing.

These homes have features specifically built so that every shape has a specific function. They tend to have geometric and natural shapes woven throughout their construction. It is, in essence, blending buildings with nature.

If nothing else, these houses may be more environmentally friendly than others you can find in Palm Springs.

The most popular architectural style during Palm Springs' modern period was Mid-Century modern, which typically featured clean lines and open living spaces without excessive ornamentation (and indoor/out passages to maximize the desert views).

These houses were especially suited to hot, sunny climates and are still popular among buyers today. They can be found in neighborhoods throughout the city but are most prominent in subdivisions east of the I-10 freeway like Trilogy where they're mixed with Spanish Colonial Revival homes and ranch houses.

Many Mid-Century modern homes have been preserved over time as Palm Springs has developed new residential areas.

Most of this era's architecture remains intact because Palm Springs was not subjected to heavy urban renewal during its redevelopment phase unlike other cities in California .

This cleared nearly every neighborhood of their historic buildings and replaced them with parking lots when freeways were built through them.

Despite that, many original buildings have been torn down in new developments where large house lots are favored over smaller, older structures that do not have the space to accommodate them.

Palm Springs is also becoming known for its high-end corporate retreats. Companies like Google, Nike and Oracle hold annual meetings here with employees flown in from around the country and stay at luxury hotels or private residences during their visits.

It's proving to be a lucrative business venture for local hotel owners and other companies seeking to cater to the influx of wealthy individuals who enjoy spending time in Palm Springs.

The city has changed a lot over the past century but still retains much of its original character as an affluent enclave located near popular vacation destination that many visitors continue to frequent.

Looking for houses in Palm Springs, or maybe just want to see what they have? Palm Springs is home to house styles that are quite different from one another.

You don't have to be looking for a house to enjoy the wide variety of home styles present in Palms Springs. You can just walk or drive around and enjoy them. If you are, though, take a look at each style to discover which one will work best for you.